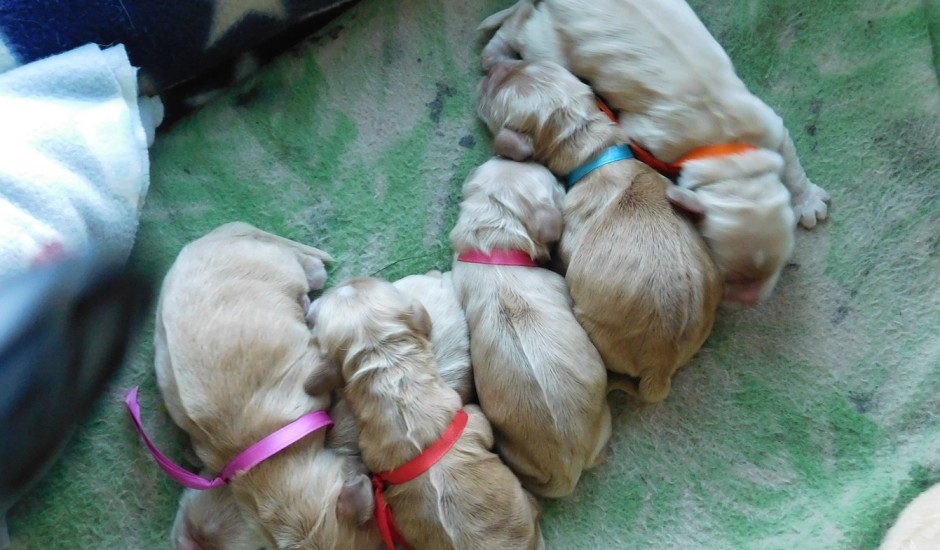 Hi everyone, my name is COco.  I just want to be awesomely pretty 'cuz Mommie Lynn said I'm darling. . . .Gee, I hope that "darling" is a good thing, right?

When I waas born, I weighed 4.5 ounces.  Is that a good thing I wonder?

CLICK ON THIS PICTURE TO RETURN TO THE PUPPY LITTER PAGE.

I'm so comfortable here, I think I'll just keep snoozin'.  Aw shucks, I just found out that this blanket was for our pit-churs this week.  What's a pit-chur and can I eat it?  Never mind, I don't have any teeth yet so it wouldn't matter if I could eat it.  Right?  LOL

All of us got our dew claws removed and our tails docked this week.  It was sorta different because it was done by a really nice Lady Vet and her team.  They loved us and snuggle us and everything.  Now I know what Mommie Lynn chose this office.  Maybe next time I can have ny eyes open and I will be able to see who they are.

You know what?  I think it's lunch time so I'd better hurry....hurry?  Now, how fast can I go crawling to Momma Lily's lunch buffet.  Sure do hope she's feeding us that really great milk cuz' I'm lovin' it.

Come check us all out next week and maybe I will have sumpin' worth telling you about.  Puppy luv~

I got my very first puppy collar today.  Mommie Lynn says it red and that I look really purdy.  I sure hope she's right 'bout that.

I scared Mommie Lynn a couple of nights ago. . . .at least I think it was night (no eyes open so don't know if it's light or dark yet remember).  I started cryin' cuz I was hungry and couldn't find Momma Lily.  Well, Mommie Lynn came lookin' for me and she couldn't find me at first.  I was curled up behind Momma Lily's food dish.  Now, don't ask how I got there (cuz I didn't have a map and I couldn't have read it anyway with my eyes still closed), I just crawled and that's where I ended up!

LOL  See ya next week.

Greetings at the three-week mark.

I've been tryin' to get all four feet goin' at one time and it isn't easy.  I can't count to four yet so I get number one up, number two up, number three up, and when I try for my number four foot, I fall down on my booty!  LOL  Okay, I'm gonna make this work and next week I plan on walking with all four feet.  WITHOUT falling down when I try to take a step, don't 'cha know.

By the way, just for the record, I was the first puppy to get up on all four feet, even if it was for just a brief second.  I DID IT FIRST!!

Mommie Lynn took us outside today for the first time.  It was kinda nice having a chance to smell new smells and look around.  Then cuz it was so cozy, I had to take a nap.  Then Wham!  It was time to come back in the house.  Gee, time sure did fly.

I love living in the living room by the fireplace!  I was thinkin we had to be at least three weeks old to move into this big doggie pen.  But, Mommie Lynn said that when we started getting our teeth, that's when we moved.  We've been out here for a week now and are four weeks old already.  In another four weeks we will be going to our forever homes.

I just can't waid to meet my forever Mom.  She has named "Lexi" and that I have a sister who can't wait to meet me too.  My sister also came from East County American Cocker Spaniels so I know that she is going to be just awesome and I am really gonna luv her!

All this talking has made me thirsty and hungry.  Gotta go eat, now that I got teeth.  Did I tell you I learned how to drink water too.  WOW!  Life is gettin' real good, let me tell ya.

Hi!  I was kinda sleepy last week and really didn't want my picture taken.  But this week, YUP!  I'm ready.

Five weeks old and Mommie Lynn let me see myself in a mirror-thingy.  I am cute!  Awww, I just feel so special.

We've been having so much fun romping in our pen by the fireplace.  You know, I tried to chew on the rock-face of the fireplace, but it didn't taste so good and I couldn't bite it.  So, I am really glad that I get to eat dry Royal Canin Puppy food now.  It's crunchy and more fun to eat than that ol' fireplace stuff!

I've been playing with my sister and brothers more and more.  They sure are fun to wrestle with.  I hope my big sister, Kayley, will like to play with me when I get to go to my forever home.  I understand my forever Mom has already made an appointment to come get me.  I can't wait to meet her but Mommie Lynn says I will really luv her.  Oops!  The boys are eating my shar of the food ~ gotta go!

I'm lookin' at the sunrise this morning.  I had to be six weeks old just to be able to come out on the front porch to see it, don't 'cha know.

Did you know that I have been trying to learn my forever name?  Mommie Lynn has been helping me 'cuz she's been callin' me "Lexi" lately.  I sure am tryin so I can make my forever Mom proud of me.  I have to remember my new sister's name, too.  It's Kayley. . . .I think.  Sure hope I don't get our names confused and I answer to her's instead of mine.

Now that I am older, I'm runnin' around in our pen and pouncing on my Sister and Brothers.  We roll and tussle and have a great ol' time.  But, it's even more fun when Mommie Lynn is changing our pen everyday and we get to play with the big dawgs.  They are so fun.  I luv chasin' them 'cuz they don't know what to make of me!

I don't know if it's my 'magin-A-shun or what, but I think my red coat is getting lighter.  Well, just a little.  I have my Daddy's and my Grandma's coloring so I hope it doesn't fade too much.

WOW!  Look at that tree.  I sure do hope there's no coconut up there that's gonna fall on me!  LOL

Well, of course I know it won't fall cuz this is just a picture I'm in and nuthin' can happen.  Mommie Lynn and Daddie Jim thought it would be a surprise to put all of us on the beach in a magical place called Fiji.  They said it is a real place in the South Seas....where ever that is.  But Mommie Lynn told me it seemed magical to her when she was there.

One more week and we will be goin' home to our forever homes.  I can't believe I am already seven weeks old already.  Time sure has flown.  I wonder if I slept a lot of it away?  Well, of course I did.....I'm a puppy and that's a lot of what puppies do.

Time to go, I need another nap.  Come see me next week so I can say good-bye.

Hi!  Don't you just love this scare-crow guy behind me?  Yeah, I think he's kinda cool.  He don't talk much but that's okay cuz I don't understand scare-crow and he doesn't understand puppy!  LOL  Isn't that funny?

Momie Lynn and Daddie Jim waited until today to do our final pictures until after we all got groomed.  We went to the vet today for our healthy vet eam, our first puppy shot and worming.  When we got home from the vet, Momie Lynn microchipped us.  An' ya know?  It didn't hurt a bit!

Okay, gotta get ready to go home to my forever home, so I gotta go pack up.  Thanks for visiting with me every week.  I sure did enjoy the time we spent together.  Now, scroll down and see my final picture.